Effective winter patterns to consider trying for the season on selected streams predominantly include nymph patterns. The trout become lethargic in the cool winter moths and try to expend as little energy as possible. With water temperatures hovering between 34-40 degrees for most of the winter, trout will not chase their food down, but will suck it in as it floats by. That is why nymph patterns are so effective. 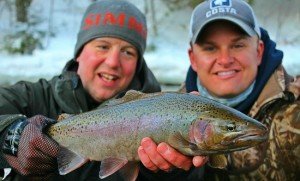 Several nymph patterns are effective for southeastern Minnesota. The basic pattern is the scud, or freshwater shrimp in an orange or yellow color usually tied on a size 14-16 curved nymph hook. I usually use this pattern as my main nymph and tandem rig it with a dropper fly (the traditional two fly system). The scud is effective because of its color and appearance, not to mention the commonality of it in many streams. Because water has a tendency to become off color during warmer periods, the scud is very effective. I usually fish a dropper pattern that consists of a midge pattern (brassie).

Surprisingly, in the winter months midge activity can be fast and furious during periods when the surface temperature reaches 38-45 degrees or so. Midges are common to all streams and are an abundant food source for trout all year round, but especially in the winter. They are extremely small in size, usually a 20-24 size hook. Brassies are a common pattern, as well as midge larvae and pupae in a dark root beer color early in the winter season and black later in the season.

Gold Ribbed Hare’s Ear Nymphs in sizes 14-16 are also a must pattern in the winter months as this fly works year round in almost any conditions. Its “buggy” look has a great appeal to trout and like the scud pattern, it is fished near the bottom where the fish are congregating. It is important to note that lead weight is needed to get your flied to the bottom of the stream. One of the biggest mistakes for novice winter fishermen is that they do not get their flies right on the bottom and drift it close to the trout.

A few other helpful hints for anyone interested in pursuing trout during the catch and release season with a fly rod include going when the conditions are favorable. Overcast days with a light or no breeze and temperatures in the upper 30’s to low 40’s is what I prefer. There is a huge difference between 40 degrees and 35 degrees. That small temperature difference will mean a great deal in terms of fish being active. Carry a thermometer and check the water temperatures. If they are unreasonably cold, the fish will not be active and it could turn into a wasted trip in terms of actually catching fish. Persistence is the key. Work a pool with your nymph for a while and keep a low profile as you stick out like a sore thumb on the bank if there is too much movement. Snow doesn’t provide an angler much of a back drop to camouflage him or herself. Stick with a few basic patterns and work the runs below the pools where the trout have a tendency to sit in the winter. They will move up closer to the head of the pool as temperatures increase during the day to feed, so this means that you don’t have to be on the stream at the crack of dawn to catch trout in the winter. In fact, I prefer the 10:00 AM – 2:00 PM shift for winter fishing. The last thing I want to do is sit on a snowy bank with cold hands and my guides freezing with ice every other cast not catching any fish.

Winter trout fishing is gaining tremendous popularity. The better places to go that are legally open in the Whitewater area near Elba, MN. Near Elba is also Beaver Creek that has a section of it open for the winter season as well. Check your angling regulations to find out the specifics of what streams are open for the winter season. Give it a try sometime, you’d be surprised how easy it can be to catch trout in the winter.