Ring-necked pheasants were first imported to America in 1881 from China, and they have since become among the hottest upland game birds of Minnesota. It’s a grassland-dependent species mostly found in rural areas near grain harvests and grassy fields, like corn. Ring Necked pheasants can survive a comparatively broad variety of temperature conditions and eat grain, weed seeds and insects.

Span: 20 to 36 inches, including the tail variability.

Sounds: Ring necked pheasant roosters crow loudest in summer and springtime, particularly at twilight and dawn. Loud, fast beating of the wings that can be in the field generally follows a rooster’s crow. Roosters additionally frequently cackle when they fly.

Reproduction: Pheasants start mating in May and April. Hens lay shortly after. They may be constant re-nesters. If the hen loses her nest before it hatches, she is going to put another smaller clutch on the ground until she lays more eggs or until it hatches. Re-nesting efforts can last til the end of August. Despite being effective at laying multiple clutches annually, a hen is only going to hatch one set of chicks (i.e., brood) per mating season.

Recently hatched chicks weigh only 18 grams typically. By 3 weeks old, they may be capable of flights that are longer up to about 150 feet. They do not leave their mom for at least 10 weeks, but brood mix from other hens does occasionally happen.

Predators: Coyote, fox, owls, eagles and hawks are the main predators. Skunks and raccoons eat pheasant eggs. These critters prey on chicks, eggs, and hens when they can catch them, also.

Habitat and variety: Pheasants are a grassland-dependent species related to agriculture. They reproduce in grasslands but spend the rest of the year around cattail marshes near grain fields and grasslands. Pheasants are commonly present in southern and central Minnesota. They don’t migrate but they do move from breeding areas to wintering places depending on climate, cover and food availability.

If given the proper conditions pheasants can be quite productive, but keeping a ring necked pheasant population that is steady is not easy in Minnesota, without long-term protection of wetlands and grasslands. Pheasant die offs do occur during extreme winter conditions, including blizzards and cold spring rains. Minnesota hunters take around 350,000 roosters annually. 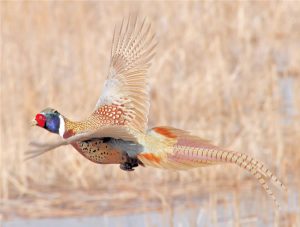 In order to avoid risk, ring-necked pheasants frequently run rather than fly. Pheasants are often seen along gravel roads eating little pebbles, which help the fowl digest food. Pheasants can go as much as two weeks without feeding by reducing energy conditions and slowing their metabolism.

The Upper Minnesota River Valley offers fantastic opportunities for pheasant hunters. The Lac qui Parle Wildlife Management Area covers. 33,000 acres and another 11,000 acres is added with the Big Stone National Wildlife Refuge. There are actually many wildlife management areas and waterfowl production areas in the area that are open to public hunting. The new Walk In Access software gives direction to 1,000 acres in the region.