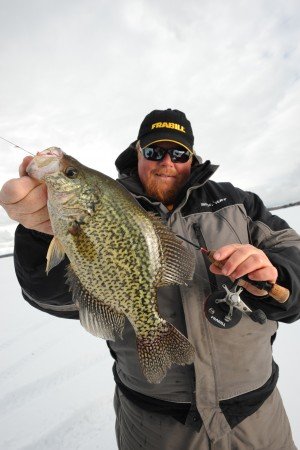 Right now, there’s a hidden hot spot in your favorite lake, and most years it never gets touched. “There’s this lake I’ve fished my whole life,” says legendary ice angler and guide, Brian “Bro” Brosdahl. “Thought I knew it pretty well. Then several years ago, I ran the entire basin in a boat armed with Side Imaging. What an eye-opener. Discovered a sweet spot that had likely been untapped for decades, maybe longer. It was just filthy with crappies and big sunfish. Still is.”

The truth, Bro says, is that every waterbody in the Ice Belt has secrets to share, if only anglers will “listen.” Whether it’s a reservoir in the Rocky Mountains or Dakotas, a pond in Pennsylvania or a big lake in Minnesota or Michigan, the surface conceals an assortment of unusual fish attractors—submerged brushpiles, old Christmas trees, crosshatched logs, sunken boats and other alien objects. At times, they literally swarm with fish.

Artificial Attractors can help you finding hidden hotspots on ice

In some states, anglers and fishing clubs obtain legal permits to place artificial cover, while in others, placing foreign objects or simulated structures into the water is a major no-no. Occasionally, state fishery agencies sink artificial cover in waterways to augment fish habitat, provide sanctuaries for young fish or to create new angling spots—particularly in fisheries lacking natural cover, such as vegetation. In some areas, locations of state-sanctioned attractors are marked and even published on lake maps.

Elsewhere, beyond intentionally placed attractors—legal or otherwise—nature itself has, over decades and even centuries, deposited into the water more abnormal structure than you might imagine. Erosion relocates dead trees and organic debris; storms sink boats; wind blows all manner of objects into the water where they eventually sink to the lake floor and are forgotten. Below, however, fish often move right into these unexpected homes. Anglers sharp enough to find them can enjoy some amazing fishing. 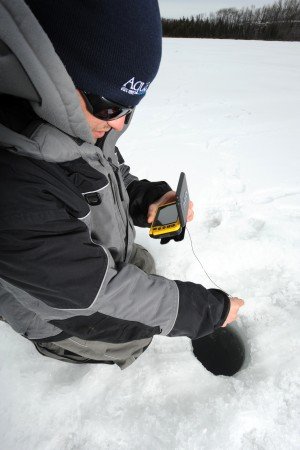 In his role as a guide and tournament angler, Brosdahl spends hours and days prior to freeze-up searching for fresh, untouched locations in his boat. Often, he’s not merely scouting for tournament targets; Bro especially savors spots he can tap during long Northcountry winters.

“To find these little sweet spots, I use two tools. First, my Humminbird Side Imaging sonar sweeps water like a pair of underwater binoculars. I set the unit to blanket 150 feet of real estate on both sides of the boat. I run just off the first breakline, back and forth between 10 to 35 feet of water. The unit draws precise details right on-screen— small rockpiles, isolated old trees or the little crib I found on my favorite lake. Move the cursor over the spot, drop a waypoint and you’re golden.

“Once found, I use my Aqua-Vu camera to zoom-in on the spot like a microscope. I want to see who’s home. The camera shows me the exact size, shape and complexity of the cover; reveals any fish in the vicinity and even tells me if they’re active, plus what they’re eating.

“On almost every lake I’ve searched, I’ve uncovered at least one of these underwater jewels. Found a big tractor tire on Leech Lake in Minnesota and it held a bunch of crappies. On lakes along the Mississippi River, I’ve come across virgin white pine logs, lost during timber operations over a century back. Where two or more are lying on top of each other, the logs become a magnet for crappies, rock bass, perch, and smallmouth bass. Even walleyes use these things. At a recent FLW tournament I caught nice ‘eyes while drop-shotting with nightcrawlers around fish cribs.”

While Bro is dead-set against introducing artificial cover, he’s not opposed to fishing the objects if they’re already in place. “There’s way too much trash left on the ice by anglers each winter. Stuff ends up in the lake, not good. There’s crud on the bottom you wouldn’t believe. I’m no philosopher, though, so I won’t attempt to explain the difference between garbage and fish habitat. Either way, if I find it, and it holds life, I’m going to drop waypoints and fish the thing.” 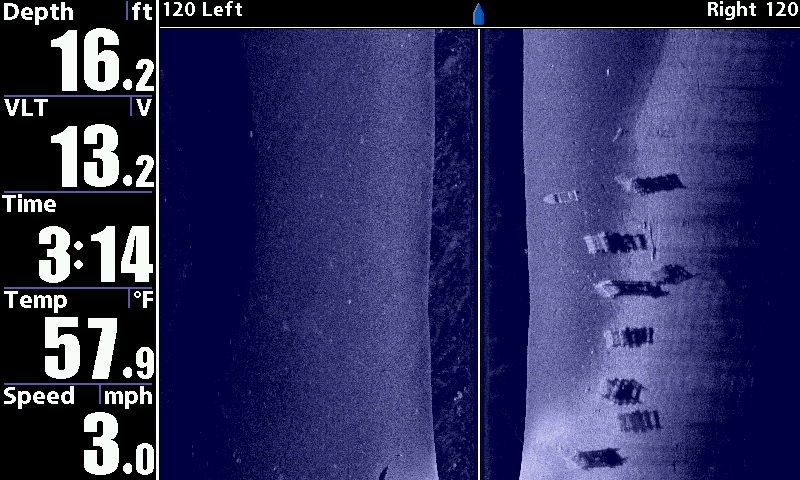 (Photo courtesy of Humminbird)– “Preseason boat surveillance with Side Imaging reveals some remarkable hide-outs, such as this string of sunken cribs and an old boat.”

The difference, Bro says, between a true fish attractor and a pile of debris lies its structural complexity and whether it offers overhead cover. “The best brushpiles have a whole mess of branches and limbs jutting in every direction. Bluegills and crappies flock to these piles. Cribs full of sticks are likewise much better than those made from old pallets that lack additional limbs. I love old cedar trees. Oaks, too. They seem to last longer, while other species of wood often disintegrate after a few years. The key attractors almost always offer a canopy; some form of overhead protection.” 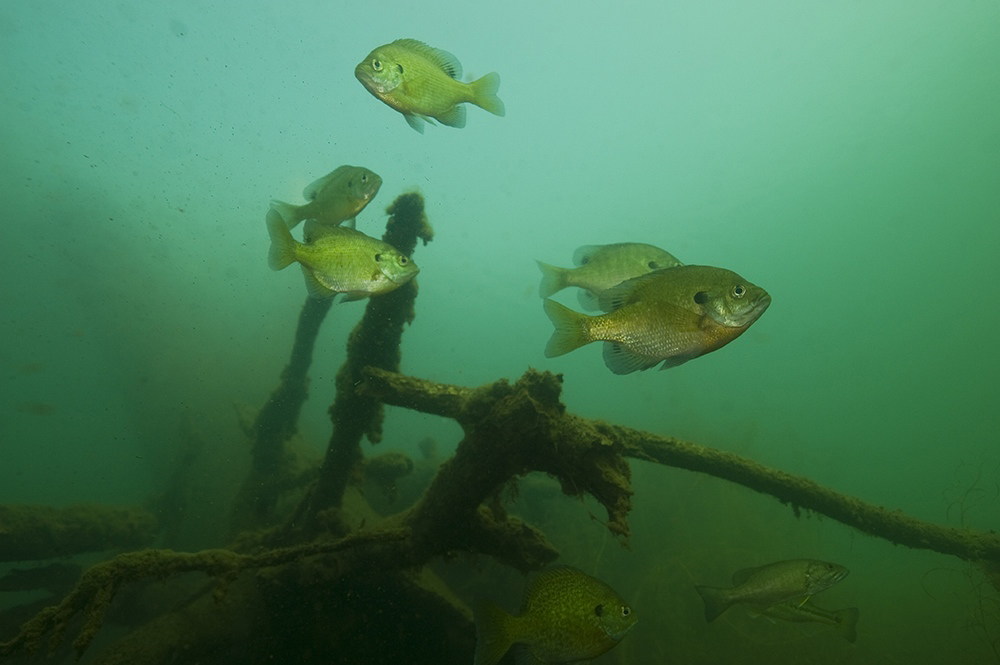 (Photo courtesy of Aqua-Vu) – “Isolated brush and wood piles attract a bounty of bluegills and bass.”

“I’ve heard biologists refer to fish cribs as ‘death traps,’” Bro continues. “The perception is that anglers can park over these things and pound ‘em until every fish has been extracted from the lake. While there’s certainly the potential to overharvest these attractors, the same can be said for any weedbed, deep basin or even an entire lake. The thing is, catch-and-release and selective harvest of big fish is still the issue. When is enough fish too many fish? It’s up to us all to help manage our lakes by releasing the right fish, and keeping only enough smaller ones for a meal.

“Heck, I get a kick of out just finding these spots, using the camera to solve the mysteries of what’s there and where fish are positioned. And then it’s fun to figure out how to best fish ‘em. Sometimes, you can simply work around the cover with spoons or plastics—this is especially true with crappies. Other times, you’ve got to penetrate through the canopy with a heavy tungsten jig. I like to down-view with an Aqua-Vu Micro camera, picking out small openings that allow the passage of a lure, which could conceal a bee hive of big bluegills.” 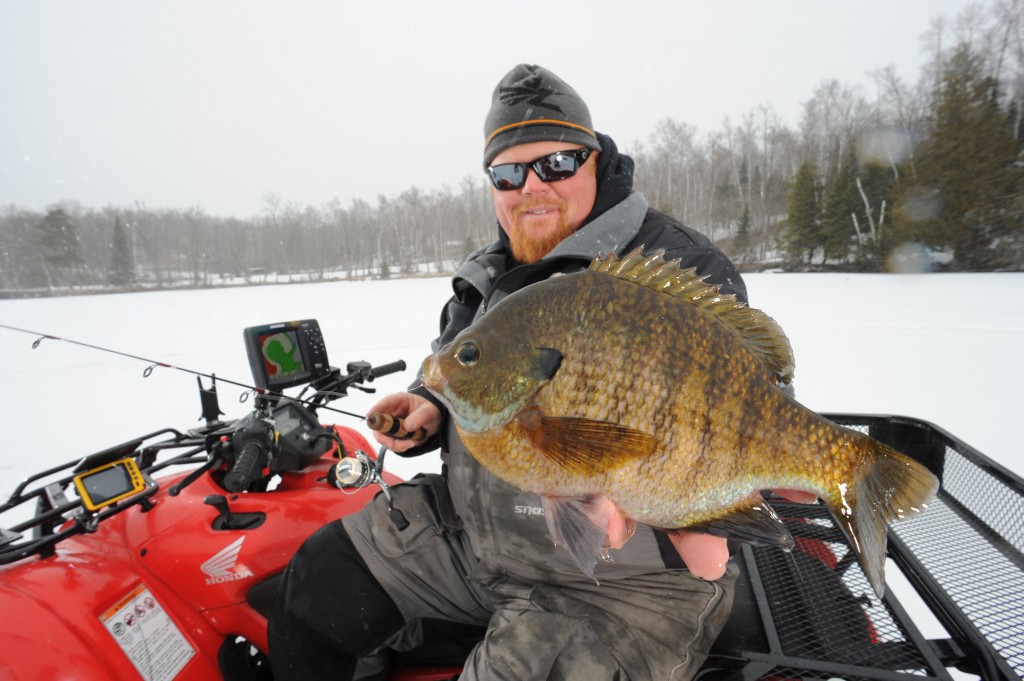 Bro adds that just because you find a brushpile, sunken boat or clump of Christmas trees, there’s no guarantee fish will be present. “In my experience, cribs and other attractors get used by fish in clear water way more than in dirty water. Also, in lakes lacking other cover, these structures can be important because they give small fish and crayfish a place to hide. It’s also why you’ll often have big bass, pike and walleyes patrolling the perimeter.

“Still, fish in some lakes rarely, if ever, use these hideouts. In other waters, they’ll simply visit them to feed for short periods before moving on. Only way to know is to knock on the door with the camera and see who’s home.”

Bro adds: “In mid and late winter, when vegetation dies off, attractors can load up with crappies and big bluegills. During coldfronts, too, fish often dump off the flats and collect on brushpiles in deeper featureless water. When other spots turn sour in February and March, or have taken a pounding, it’s nice to have a few of these little hideouts in your hip pocket.” //