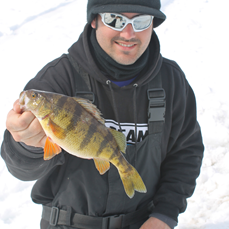 That Time of Year
The season is finally beginning to make a switch and believe me it’s for the better. Last weekend was the first time I could drive my truck on the ice all season, going wherever I wanted to. This counts mid-winter resort ice roads, as the snow was too deep to get off the beaten path.
I was pretty much sitting atop a snowmobile for nearly the whole ice season. If I didn’t, I was unable to get to the fishing holes of my choice. Now, however, it’s a breeze, although at the time of this writing (Sunday night) more snow is forecasted for the North Country. Hopefully we won’t get as much as they’re predicting.
It’s so nice to fish out of the back of a vehicle, which is what I did last Sunday. Driving around, looking for perch, all of the necessary gear was at arm’s length, positioned on a piece of carpet in the truck box. Warm weather had me leaving the shelter at home, along with a heater, propane tanks, and more. This maneuver left the back of the truck nearly wide open and offered a great work station as well as a good place to sit while fishing.
Another plus is the fact that a container full of beverages will now be left inside the truck, as long as it’s cold enough to keep them chilled but not frozen. The same goes for bait, like minnows and wax worms. Now I can leave everything in the truck. It’s just cool enough to keep them comfortable and I don’t have to worry about frozen bait the next morning.
This same scenario plays out in the fall, only in reverse. The weather will cool down to the point where I can leave beverages and bait in the boat because it’s just cool enough to keep them in good condition. Prior the cool down, all had to be put away in the fridge for the next outing. No wonder late ice and late fall are two of my favorite seasons. Fish are biting and the living is easy.
Saturday found a few of us fishing Chequamegon Bay on Lake Superior. In search of trout and salmon, we found extremely slow fishing but managed to enjoy the day as usual. You can’t hammer them on every outing. However, we did end up pulling a few coho salmon, lake trout, and whitefish to the surface.
The weather was gorgeous. Actually it was a little too warm for my liking, as we were all over-dressed. Heavy outerwear came off around noon and stayed off for the rest of the day. Sitting with my back to the sun, I tried to avoid the blowtorch effect but still experienced a burning face at day’s end, even though sun block was used. Some of my buddies didn’t use any and made the mistake of looking into the sun for most of the day, not good.
The very next day, I was 200 miles in a different direction, looking for jumbo perch. We found them and once again I ended up playing hide and seek from the blistering sun. Sitting on the tailgate of my truck, I managed some very nice fish.
The perch finally seem to be migrating and making their way to the spawning grounds. We fished in 18′ of water but I know from experience that these fish will be able to be caught in 6′ or so in a couple weeks.
Get out there and give it a try. The perch are biting, as are the bluegill and crappie. Oh yeah, don’t forget the sunscreen.