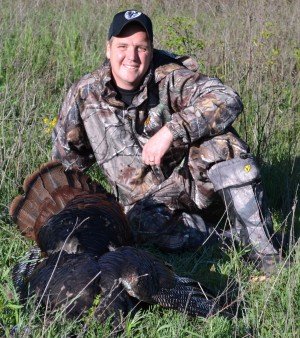 I love to turkey hunt, but I can’t sit still, so at times it’s a real challenge. When I first started turkey hunting, I’d hunt in the same spot, nice and still until about nine o’clock and then head home. On the way home, I’d see toms strutting everywhere and I soon realized I was doing something wrong. Since then I have developed a solid plan that works for me. I hunt in phases. Each phase is a time of the day that corresponds to certain turkey behaviors. I hate wearing a watch, but when I am hunting with my plan, I use the clock on my cellphone to keep me on track and keep me disciplined. When I am bored stiff hunting, time seems to move really slowly, the clock keeps me honest. I also bring plenty of food and water, in case the plan takes a while to work.

When I turkey hunt- I like to go out until I have a bird or it’s dark- whichever happens first. I remember a hunt a while back when I was glad I had a plan in place…

Driving to the new farm reset my patience. I had been out in the woods since 5:30am. It was now 11 am and I was birdless. Most hunters would have given up long ago. Not me, I had a plan and I was sticking to it. At about 11:25 my plan had worked, with three longbeards coming into my sweet calls like they had read the script. At 11:30 I had one giant tom slung over my shoulder on the way back to the truck.

I always start out in the morning prepared for an entire day hunt. I usually dress in ScentBlocker Merino wool baselayers, followed up with my Recon pants or Spider Web bibs. On top, I’ll wear the Trinity 1.5 shirt and one of my ScentBlocker hoodies. Scent control doesn’t matter for turkeys, but I like to use it in the spring anyway for a few reasons. First, I don’t want to spook any deer! Don’t let that buck bust your bird! Spooked deer will alarm any nearby turkey and send them running to the hills as well. Also, I like to try and shoot coyotes whenever possible – and they are very active in the spring turkey woods. Being scent free is crucial to coyote hunting.

So, what does “hunting in phases” mean? The first phase of the plan is the hunt at first light. I get up really early, to arrive in my spot well before the song birds start chirping. When the birds start to chirp, the turkeys get woken up. If possible, sneaking in before they are awake decreases my chances of getting busted. At this point on the day, I like to get in nice and tight to roosting areas. The idea is to be there or nearby when the toms fly down and start to gather their hens. Hopefully my decoy will catch their attention to being them into gun range. The first few hours after the birds fly down, this area will be a good one to hunt. The birds will mill around, eat a bit, get organized and eventually head off somewhere else. If I have not killed a bird in phase one, I switch to phase two at about nine o’clock.

Phase two is moving to a strutting zone. A strutting zone is an open area where a tom can strut and be seen showing off from far away. I prefer to hunt field edges during this portion of my hunt. If you do not have access to fields, try open ridge tops or flat river bottoms. When I move to a new spot, I get to stretch, re-charge my batteries for a quick minute or two, and re-focus. I quickly get set up and start calling. Sometimes I use a decoy, sometimes I don’t. At about mid morning the hens will leave the toms and return to their nests to tend their eggs. Now the lonely toms will get trying to find more hens. Usually they will head to a strut zone to show off a bit, hoping to find a new girl. I like to beat them there. These lonely strutting toms are usually pretty cooperative to calling efforts. I hunt the strut zones till about noon or shortly after.

At this point, I make a crucial decision to stay or go. I am blessed with many small chunks of turkey hunting property. More often than not, I am ready for a change so I drive to another property. I keep food in my car, so I maximize my time out of the woods by eating along the way. When I get to a new property, I head straight to a strut zone. This is a difficult task. Quite often I am arriving at the new property mid day, and the toms have already beaten me to the fields. That is OK; just set up close and start working them. If there are no birds in the strut zone, quickly and quietly get set up, the birds will not be far off. The scenario I described previously occurred on a high point in a hayfield, a perfect strut zone. The toms came in on a string because at that point in the day, their hens were on the nests, and this new “girl” in town caught their attention. I guarantee if I had been in that spot all morning, calling the entire time, they would not have been so eager to respond. Variety is the spice of life, and that rings true in the turkey world as well.

If the second strut zone doesn’t pay off after a few hours, hop back in the truck and drive to the third, and fourth, and fifth, etc… Like I said, I have a lot of different farms where I can turkey hunt. I have called in several nice birds in the late afternoon and early evening hours. I have noticed at that time of day, they don’t gobble as much, so keep your eyes peeled. If you are not as fortunate as I am, and you need to focus on one piece of property, there is still hope.

If you can’t go to a new property, pretend like you left. By now, every turkey in the county has heard your calls, so it is time to take a break. This is hard to do for a lot of turkey hunters, but it is important that the calling stops for a while. At about 1pm, I’ll head to a dust bowl. Turkeys need to dust frequently, and dust bowls are great mid day social gathering spots. If an active dust bowl is accessible, sit by it and be patient, eventually something will show up. I’ll sit a dust bowl for a few hours in the early afternoon.

At about three pm I’ll start “running and gunning”. What this means to me is that I wander around the property ever so slowly, calling the whole time. Try to use new calls now and mix up the cadence as well. Calls tend to lose their effectiveness each time they are used, so a fresh set of calls and a new style could really change your luck. Walk to all the old spots, calling and listening. As I said earlier, the turkeys don’t gobble as much later in the day so you’ll really need to practice expert woodsmanship here. Keep it up till you find a bird to work, or until it gets to be evening, whichever comes first.

It is important to check local hunting regulations. Some states do not allow turkey hunting all day. Either way, maximize the time in the woods and hunt as late as possible.

A few years ago I was sweating bullets and fighting off thick clouds of mosquitoes – but it was worth it! I had a huge “swamp tom” slung over my shoulder as I embarked on the 1+ mile hike back to my truck. I was thankful for my Recon pants which shed the burrs and brambles and, while I was pouring sweat, my Trinity 1.5 shirt wicked moisture away and left me feeling cool.

Late afternoon/early evening finds me back where I started, the hunt has come full circle, and I’m at the roosting area. The turkeys will need to come back to roost eventually, so sit and be patient. Note: make sure to check your state regulations on legal turkey hunting hours, some don’t allow evening hunts. When I am in a roost area, I do not call or use a decoy at all. This is very similar to deer hunting. Just sit, wait patently, and keep your fingers crossed. If you do not kill a bird this way, listen for roost gobbling. The toms will gobble quite a bit again before dark, trying to gather and inventory hens in the area. Make sure you pay attention to where the gobbles are coming from, and start back near them in the morning.

By having a plan, a watch, and a bit of self discipline, I have become a much better turkey hunter. Many of the toms that I have shot have happened after ten o’clock AM, and on the second or third farm I tried that day. A lot of good turkey hunting time is wasted at the local diner when guys sit only their first light spot, see a “henned up” tom, and drive away complaining about him. To me when I see a henned up tom, I see a bird that can be hunted at a later time, and I also see a chance to hop in the truck grab a bit to eat, and start fresh at a new spot. Have fun, be safe, and remember to stick to your plan.