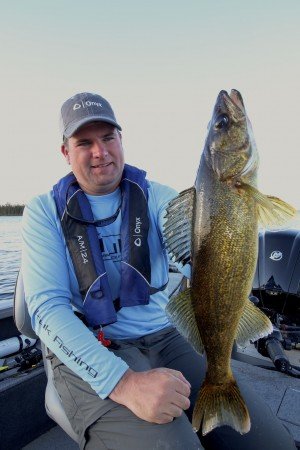 Like many anglers, I started out relying on crawlers to tip my spinner rig. Crawlers can be fished through such a wide spectrum of speeds and what walleye can resist the squirming undulating action of a big fat crawler pulled through the water? Over the past ten years, like many anglers… my rig tipping has evolved to include a lot of soft plastic and pork crawlers.

Whether you are running a spread of planer boards on the Great Lakes or hitting a milk run of points with bottom bouncers on one of the Missouri River reservoirs, you would be hard pressed to find a more effective presentation than a spinner rig. The combination of vibration, flash and profile combined with the speed makes this classic walleye weapon so effective through the dog days of summer.

My own personal evolution away from live bait began on torrid bites where I literally couldn’t have enough crawlers in the boat and soon realized that I could catch the same amount of fish tipping with soft plastics. Over time, my confidence in using soft plastic and water-soluble crawlers soared. Soft plastic tipping options for spinner rigs were convenience in a bag, with no messy worm bedding or ice. There is a lot to like about not needing live bait.

On the Great Lakes, anglers are often running spinner rigs high in the water column with split shot or through the middle of the water column with trolling weights like Baitfish Trolling Weights or classic Bead Chain Keel Sinkers. On many inland bodies of water, three way rigs and bottom bouncers are often used to follow structure. Three ways more so in river systems or over basins and soft bottoms while bottom bouncers shine on rock, tight breaks, and sharp contours or along weeds.

I started out rigging the soft plastic crawlers just like I rigged the real counterparts. The front-hook ran through the nose of the crawler (with a little bit of slack line on the back hook) so that the worm would pull straight through the water. Over time, that evolved into the snake rig that I have had so much success with over the past few years.

Soft plastics however offer much more possibilities for rigging and action. By keeping the line between the front and back hook tight and imparting a curve on to the soft plastic crawler or worm, the action changes and comes alive. This type of rigging requires a bit more speed, often between 1.7 to 2.2 miles per hour. With the curved worm and the faster speed, the rig begins to zigzag through the water in a very realistic action that looks like a snake swimming in the water, the snake rig.

I have had tremendous luck with this snake rigging from mid to late summer and especially so for larger walleye. I theorize that the zigzagging swimming action is more difficult for small fish to hone in on and catch with their smaller mouths where big fish don’t have an issue. This has been my go to weapon the past couple of summers when I need a big fish when using spinner rigs. Bigger fish just like this particular action. With the right combination of speed and warp, the goal is to get the soft plastic to come alive in a seductive and realistic swimming action. Often necessary to run the snake rig next to the boat just to make sure that it is working properly.

This rigging tweak can help you catch bigger walleye this season or at least give you another very effective alternative to classic live bait options.  When fish are really off or if the bite is such where you have to feed the fish or let the planer board fall back, the real night crawler often trumps everything.  There are other bites however where the fish drag and choke up on the spinner and want the spinner moving faster.  When the bite is good or excellent, soft plastics take over.

By hooking a soft plastic crawler with a little bit of slack between the front and back hook, you have an easy to hit target that moves straight through the water.  This classic approach works many days.  By just hooking the soft plastic worm with one hook in the nose, you create a fast fluttering action when the spinner is pulled through the water.  By rigging the soft plastic worm with the snake rigging method where the worm is curved like a banana, the worm begins to swim behind the rig.

All of these rigging options have their place and I have seen days where each look is desired by fish.   This season, experiment with these methods and vary your rigging to catch even more and bigger walleye.