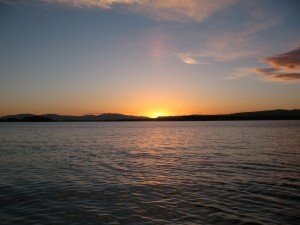 In between the hot, late summer weather and worst boat traffic of the season, lies a light at the end of the tunnel for serious trophy bass hunters. The two week time frame preceding the turnover can offer some of the best trophy fishing for late summer giant bass, both largemouths and smallmouths.

This scenario has repeated itself for me through the decades of chasing giant bass both in the Northeast and here in the Southwestern part of the country. Being a night fishing fanatic to begin with, I’ve zeroed in on this later part of summer, particularly the pre-new moon phase, to chase huge bass on any waters I’ve fished. Big bass seem to sense a change starting to take place, and this short two week window has produced a large number of my trophy size largemouth and smallies throughout the latter part of the summer season. I’ve always divided the seasons into specific time frames; during the warm weather months, the early summer peak, mid-summer, and late summer into pre-turnover time frames.

Working the incremental time changes properly for peak bite windows through each of these warm weather periods is crucial. Bite windows become shorter as the late summer time frame approaches. Combine weather element factors, various big fish locations on each body of water that you fish, moon phases and being sure to select proper presentations for each exact scenario are all key ingredients to taking out-size bass from early summer peak through pre-turnover time frames. 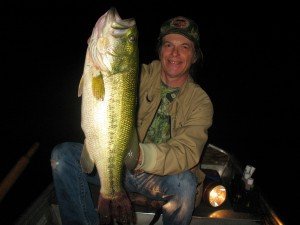 On lakes containing predominant off-shore structures and a large forage base, my primary target zones are main lake basins, channels, pelagic ledge areas and off-shore humps. Diversions in bottom contours also hold some of the largest populations of largemouths and big smallies. During this last stage of summer, focus on areas where forage pods abound at various depth levels. Many species of baitfish will hold on, or above the thermocline and in the higher ranges of the water column. During primary bite windows throughout the night and just before dawn, giant bass can be seen coming out of the water to take bluegills and a wide variety of various species of baitfish. These locations can continue right through fall turnover. Other productive late summer haunts for out-size bass include the far ends of expansive weed flats, steep coontail edges and inside and outside turns on deep growing areas of thick vegetation. The prime zones are always closest to the main lake basins where baitfish pods move in during twilight hours.

Hot baits and presentations for the last stage of summer into fall turnover include: bluegill imitating swimbaits, suspending jerkbaits in larger size ranges, wakebaits, short-arm spinnerbaits fished both straight vertically and horizontally, bladed swimjigs and heavy swimjigs tipped with large trailers, crankbaits, and various topwater baits. Depending on bass locations and weather conditions, a walking bait such as a ‘Spittin’ Image’ will produce well, as baitfish move on to expansive flats from main lake basins. Since I’ve always been a fan of cross-over baits, many times I will choose pike and musky size jerkbaits to run across the edges of flats during prime bite windows. During low light conditions such as the pre-new moon, these baits produce extremely well. When horizontal presentations slow down, switch to vertical options.

When late summer fronts are arriving, bite windows will increase for days at a time. The windows to be on the water for the largest bass in any system will occur in between fronts. This is the most productive time to be on the water hunting any species of trophy fish. Bass, walleyes and muskies will always be on the feed during extensive periods of frontal passages during the late summer time frame. Combine this weather factor with fishing from 4 days before and up to the official new moon, and you have the ingredients for big numbers of out-size fish. After the mid-summer crowds, high boat traffic and stagnant hot weather seems to slow down the bite on your lakes, don’t miss out on this late summer big bass bite. Timing it can be critical and it may vary based on geographical locations. Weather factors can intensify and prolong the bite. On average, it is a 2 week to 20 day time frame. It is an occurrence that will happen every season anywhere in the country that you fish, for a variety of species on any waters you target. If you’re not fishing it, then you are missing out on some of your best fishing of the season. 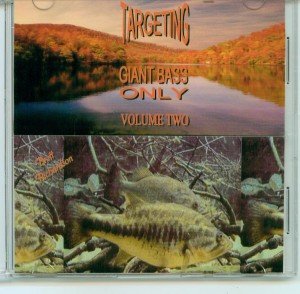