When ice fishing walleyes cold front can put them off their feed. Slow eyes not biting are frustrating. Here is how we GET them to bite under the ice…. 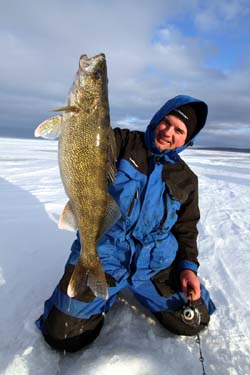 Slow rolling walleyes that do not accelerate up to the lure and just nose in can be frustrating. Anybody who has spent any time fishing for walleyes can relate to times when the fish almost appeared timid. Too high of a lift or too hard of a pound results in a sediment cloud as a hard tail flap scoots the fish away , when ice fishing walleyes cold front turns them off… we can actually scare them at times with lures.

Some days, walleyes might bight during peak times and than get turned off as the sun gets higher, other situations that shut down a bite might be a change in weather or fishing pressure. These fish can still be caught and an angler can still salvage a great day on the ice when ice fishing walleyes cold front if you make some adjustments and really know how to read your Vexilar. There are a few ways to tackle these tough critters; honed down jigging techniques and dead sticking.

The key with jigging in this situation is getting the lure to bob or rock in a slow swimming motion. Small spoons like Northland Tackle Forage Minnows are excellent. Another go to weapon is actually one of my favorite panfish jigs… the largest size Hexi-Fly. Swim the lure like you would for panfish. Using the small, subtle stuff also requires some lighter action rods and lighter three to six pound test line so that the rod tip loads up slightly. When ice fishing walleyes cold front the bites are often distinguishable by just some extra weight or the absent of jig weight, that feeling of nothingness.

The ultimate rod for ice fishing walleyes cold front is our popular 28 inch Jason Mitchell Meat Stick which is a sanded glass blank that features a feather light tip that quickly loads to some serious backbone for setting the hook. Pair that rod with four pound test Bionic Braid so that you have more leverage on the hook set with less stretch. When working the jig up or down, slow is the game. Slowly swim the jig up but a killer move on these fish is a slow free fall back down.

With the Hexi-Fly, I like to tip them with just a minnow head or sometimes a gob of wax worms. With spoons, minnow heads are an option but for ice fishing walleyes cold front I picked up a really useful trick from Ice Team Pro, Jeff Andersen on Mille Lacs a few winters back. Andersen often pinches the minnow off about half way back so that the air bladder causes the minnow to ride horizontal on the hook. Andersen theorizes that on really tough bites, the horizontal minnow is easier for fish to inhale when they nose up and flare on the minnow. I have used the half minnow trick since with great success on tough fish.

The other option is dead rods or set lines. Again, the soft tip of the 28 inch Meat Stick makes the rod a good dead stick weapon. Jigs with a wide gap hook like the classic Northland Fireball are tough to beat. Ice Team Pro, Keith Kavajecz showed me a wrinkle in the dead rod game recently on Lake of the Woods that was deadly effective for him. Kavajecz dead hooks a large minnow through the skull and than hooks a small minnow alive on top of the dead minnow.

There is something to that big/ small minnow combination when ice fishing walleyes cold front that really triggered reluctant fish. Besides adding bulk, the dead minnow adds weight and really limits the mobility of the smaller minnow so that the whole package can only roll and squirm in place. When a fussy walleye moves in, the minnow can’t swim away. I have also pinched off the tails of minnows and have had success with that.

Making the minnow a slow easy target is one strategy, the other strategy is to use lively shiners, chubs or rainbows in an attempt to trigger an aggressive response. When trying to trigger aggression with live minnows, a plain hook and split shot is still often the ticket. Some folks use small treble hooks with success but my best set up remains a size four long shank Aberdeen hook, taking the minnow and knicking the hide right behind the gill on the side of the minnow with the hook point facing towards the head of the minnow. That particular hook has enough bend and shank where the minnow doesn’t tear off very easy and the batting average with hook sets on fish seems better.

If you are missing fish while ice fishing walleyes cold front with dead rods, one trick I would often share with people when I was guiding was to simply set the hook with the reel. When the rod tip drops, pick up the rod and spin the reel handle until the rod really loaded and than lift up on the fish. With dead rods, another trick that can work well at times is to hang the minnow a few feet higher than where the fish are coming in. The higher minnow can be seen from further away and when a fish would raise that high to look the minnow over, they typically ate it.

All of these techniques and tips can work wonders for tackling tough walleyes. Typically, these tactics are a last resort while ice fishing walleyes cold front when more aggressive tactics fail to produce fish. Often, we look for fish and break down water with aggressive tactics but sometimes need to switch gears when times are tough. Passive or subtle presentations can compliment the more aggressive fishing strategies when conditions dictate.