It’s no secret.  Big water grows big crappies.  The large, deep lakes of Minnesota have an abundance of forage and more places for crappies to hide, feed and grow.  Find a big lake with relatively low angling pressure, and you’ve set the stage for potentially epic slab crappie fishing.

But you’ve got to find them before you can catch them.  Anglers who do a little research, drill enough holes, stay mobile and fish speedy baits will be rewarded with success. 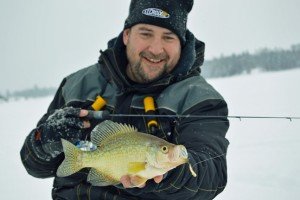 In smaller, shallower lakes, crappies are typically located and caught throughout much of the winter season over main-lake basins.  In large, deep lakes, however, they tend to avoid the deepest areas and use flats, humps and basins ranging from 20 to 40 feet deep.  But crappies are also notorious for suspending. Depending upon conditions, they can be found anywhere in the water column, creating an additional variable in the angling equation.

As the ice-fishing season nears its end, crappies transition from their deepwater wintering areas towards shallow bays, channels and river mouths in preparation for spawning.  Depending on where and when you fish, concentrations of crappies will be present along a relatively straight line between these distinct areas. During the late-ice period, take a stab at identifying some of these likely travel paths between wintering areas and spawning areas on a map of the lake you plan to fish.  Look for potential staging locations where cover, structure or current variations are present along those paths.

Once you’ve identified attractive areas, gas up the auger and get to work.  Use your GPS to confirm your location on the ice, and pick a variety of sweet spots over the particular structure you plan to fish.

A larger fishing party is beneficial because you can share the work of drilling holes and checking them for fish with sonar.  Once you mark fish, take the time to drill more holes.  It’ll save you time in the long run as you’ll waste less time fishing an unproductive hole when an entire school may be located just 10 or 15 feet away.

Once the crappies are located, hole hopping is the key to keeping busy catching them.

“Here on Lake of the Woods, the guys who are willing to leave the comfort of their fish houses and use their electronics to fish from hole to hole are the ones who catch the most crappies,” says Lake of the Woods Minnesota Tourism director and avid angler, Joe Henry.

“The best crappie anglers won’t waste time fishing a hole that doesn’t produce a mark on their flasher. They’ll keep moving—drilling more holes if necessary—until they get a sonar return,” he continues. “Then they’ll drop down, catch a fish or two and move on once the action slows.”

Effective as it may be, hole hopping requires some specialized gear – especially at the very top of the continental United States on Lake of the Woods, where daytime temperatures can often remain below zero.  Quality boots and outerwear are a must.  A piece of gear like Frabill’s Tackle Pack-Hand Muff is also indispensable, keeping tackle organized and at the ready, while also serving as a vital and cozy refuge for off-duty hands. 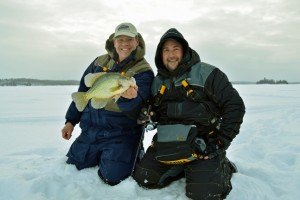 Crappies display a variety of moods, and their responsiveness to various presentations can change throughout the day – often rapidly.  Late-ice crappie anglers should be prepared with a variety of offerings, from small tungsten jigs tipped with thin plastics to relatively large jigging spoons.

“When crappies are aggressive, it’s hard to beat a Slender Spoon or a Buckshot Rattle Spoon tipped with a minnow head or tail,” says Henry, who prefers variations of gold and glow red for Lake of the Woods’ stained waters.

When a fish is showing on sonar, Henry advises stopping the spoon 4 to 5 feet above it and slowly working it down if necessary.  “A lot of times you’ll see the fish begin drifting up towards your bait immediately,” Henry says.  “If they do that, I’ll slowly raise the spoon while twitching it ever so slightly and make them chase it… Once you get them moving, they’ll usually charge it,” he continues.

Aside from a jigging spoon’s larger profile, Henry prefers them for another reason.  “Spoons fish heavy,” he says, referring to their ability to punch through a slushy hole and get back down to other fish quickly once one has been caught.  “If you’re marking a fish down there, a spoon is going to get down to it quickly… hopefully before it leaves,” he adds.

Crappies aren’t usually too difficult to catch.  But they can be hard to locate, especially on a vast piece of water.  Do your homework ahead of time, be willing to drill a lot of holes, fish fast and move if necessary.  Some call it ice trolling because of the amount of water one can cover this way in a single day.  Of course, if you really want to tip the odds in your favor, consider hiring a guide or consider fishing out of a full-service lodge. 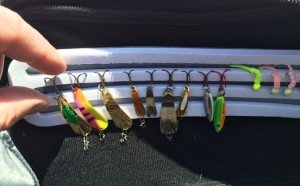 At over one million acres, Lake of the Woods, Minnesota is a prolific fishery.  Best known for its walleye, sauger, yellow perch and northern pike – all of which can be caught in great numbers all winter long from the comfort of countless heated ice houses placed and maintained by a number of full-service lodges – Lake of the Woods is also one of North America’s best trophy crappie fisheries.

Crappie fishing at Lake of the Woods, however, takes a bit more work and planning.  Some of the best crappie fishing on the lake takes place around the Northwest Angle, a thin strip of U.S. land and water extending north into Canada.

“Crappie anglers interested in coming to Lake of the Woods should consider staying at one of the lodges up at the Northwest Angle,” says Henry.

There are several lodges to choose from, and any of them will work with you to meet your specific angling objectives.  Most use classic and reliable Bombardier track vehicles to transport their customers.  It’s a unique experience that adds value to an already exceptional fishing trip.  “They’ll get you comfortably to and from the best bites, which may be in Minnesota or Canadian waters,” continues Henry.

Sliding up into Canada is a relatively easy option for anyone traveling to the Northwest Angle.  Canadian fishing licenses are easy to obtain at the lodge, and a simple phone call to Canadian authorities is all that’s needed to gain legal entry for fishing –  for walleye, pike, muskie, perch or, of course, slab Canadian crappies.

Ice fishing for crappies extends into April at Lake of the Woods, providing yet another super reason to visit this outstanding angling destination.  For more information, call Joe Henry at Lake of the Woods Tourism at 800-382-FISH (3474), or email [email protected]  Be sure to ask about walleye, sturgeon and other four-season angling opportunities, too. 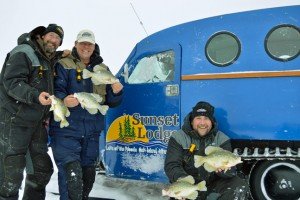