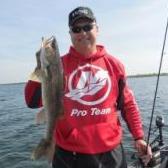 Anyfish2,      The fish we have been catching so far this year do not look thin at all. They are of average weight for their length--nothing like great lakes walleyes feeding on open-water forage

Sounds like most of you are motivated by the desire to see Mille Lacs lake back to the fishery it once was, even if you have conflicting opinions and ideas on how to accomplish this. Let's please keep

hardcore,      We do power corking shallow and deep. Shallow, we aren't going to see fish on the locator, but we move around on shallow flats watching the locator for larger rocks, humps that come up