We went out about 1:30, marked a few, seemed to come in but no bite. They usually start hitting about 3:30 or so on Coon, at least that was last winter. We came in about 3:00. Main purpose was to chec

Bass fishing has been the best its been to start a season in the first month I've maybe ever had.  I've been out 6 times and its been fantastic in terms of both numbers and quality.  Lots of pike by a 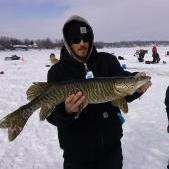 Got out onto a north metro lake today after a family get together. Hit a couple nice 9 inch sunnies and some 9 1/2-10 inch perch, got a lot of 7-9 INCH crappies too.