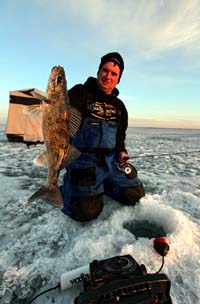 Hitting the ice at the start of the season is a new beginning. There are times where we find fish right where we thought the fish should be at first ice and there are times when the fish are not where you think they should be. Some lakes that were good last winter will not be good this winter and vice versa. Finding fish at first ice is a process of elimination. There are lakes I cannot wait to hit this winter but I truly will not know whether they are good or not until I start drilling some holes.

If there is one thing however that can greatly enhance your edge at first ice, my advice would be to watch fall bites closely. If possible, look at some lakes that you intend to ice fish during the fall. Not only can you get a really good handle of the size of fish and how the lake lays out much easier while in a boat but here is something that I strongly believe… water that is fishing really good come fall typically fishes well at first ice. On the flip side, water that has had a tough fall bite often has a tough bite during first ice.

Fall fishing for me is as much about enjoying the last few days of open water and catching fish as gathering intelligence for the upcoming ice season. The general patterns of fall often carry over into ice and what is even wilder, the exact spots or icons where fish are holding in the fall are often loaded with fish at first ice.

There are general rules of thumb and general patterns that seem to take hold on many fisheries across the board but every year has a little bit different twist. There have been times for example where deep rock piles on Devils Lake (where I spent my career as a guide) would be loaded with nice fish and at first ice, we caught fish off of those spots as soon as we could get to them.

A few years later, the rocks piles were not holding fish come late fall like some other years and the fish were really relating to shallow weed bed edges and guess what, that is where we found fish at first ice fishing season. Time on the water in the fall enables you to gather a little bit more information so that you can take the shorter path to finding fish come ice. Doesn’t matter the species or the body of water, this intelligence enhances your winter game.

Extreme weather is probably the only thing that can disrupt the transition from fall to winter. The worst thing that can happen to a lake or an area is extremely strong winds right at freeze up. We saw a huge example of this on Lake of the Woods a handful of years ago where late fall winds whipped the lake into a dirty froth right before the lake froze up and the poor visibility created tough walleye fishing during first ice fishing.

We had a similar occurrence happen on Devils Lake a few years ago where eastern and southern shorelines especially over the larger bays and basins were terrible. The water visibility was so poor that you couldn’t see the bottom of the hole for about a month in these locations while opposite sides of the lake were fine. The best indicator that this has happened is jagged ice.

If the surface of the lake looks like a broken jig saw puzzle with pieces of ice sticking up all over or if you drill a hole and there are multiple layers of ice, you might have to switch to the opposite side of the lake or switch bodies of water because typically, dirty water hurts you at first ice. There are adjustments you can make when you encounter this, on Lake of the Woods, anglers finally figured out that the fish were suspended right below the ice.

On Devils Lake, I have had some success fishing in really shallow water when the water was dirty but this wind affect is usually drastic and negative enough where I tend to avoid it if possible, much like fishing a river…. I don’t look for dirty water. Don’t confuse stained water with dirty water, stained water can often be good but dirty water usually shuts things down.

By keeping a pulse of what is happening on fisheries during the fall, you have a huge advantage during early ice so jumpstart your season now by being observant, marking down locations and lakes and gathering information. You will shave so much time off the hunt for fish if you can put the fish to bed in the fall and be one of the first people on these locations at early ice.

The time to prepare for first ice is during the fall when good fall locations often lead to great first ice opportunities. Pictured is the author, Jason Mitchell with a great walleye.