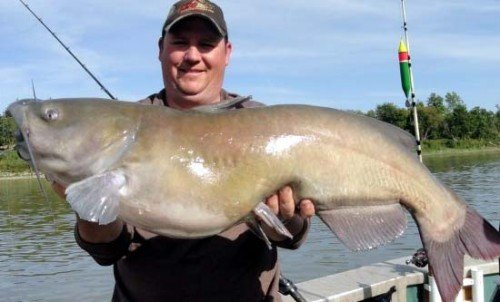 Who says you need to always use stinky stuff to catch catfish? Sometimes, cats are as happy to actively swim and chase prey as any freshwater predator. In fact, as anglers continually discover, catfish can be caught with a whole array of methods previously ascribed to their ‘glamorous’ aquatic brethren. Driven by broad powerful tails, forceful frames and muscular mandibles, the catfish clan—channels, blues and flatheads—is entirely capable of kicking bass and waylaying walleyes in any underwater arena. 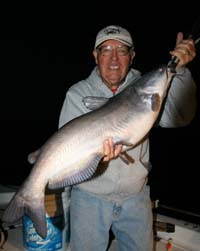 Trolling Up Tons
On North America’s preeminent catfish factory, many of the most successful fishing guides stay mobile to boat loads of barbels. Foremost among them is popular Santee Cooper Reservoir, South Carolina guide Captain Marlin Ormseth. Born and bred trolling for walleyes on Dakota reservoirs and the Great Lakes, Ormseth years ago moved to Santee-Cooper country. Overnight, he became a dedicated cat convert. But he also wondered why big lake catfish should be any different than their marble-eyed counterparts. Turns out, they weren’t. Today, Ormseth endlessly trolls across Santee’s watery expanse, pulling planer boards, spinner blades and other eccentric catfish concoctions. Other than commercial fishermen who run massive trotline sets, Ormseth possibly boats more sheer catfish tonnage than anyone else on the lake.

His hottest tactic of the past season is something he calls a chum rig. Trolling between .4 and .8 mph with his Minn Kota, Ormseth runs a 3-way drop sinker several feet ahead of a ‘scent chamber,’ which is rigged inline a foot ahead of a Rippin Lips Circle hook and a piece of cutbait, such as shad, sunfish or herring. The scent chamber, Ormseth says, is a modified hollow plastic bobber, filled with a cotton ball and injected with Rippin Lips’ Scent Trail—a potent new scent and flavor attractant that’s become quite popular among the catfish crowd—through one of several holes drilled into the plastic chamber. As Ormseth trolls, Scent Trail gradually releases a steady stream of powerful chum, which catfish use to track and strike his baited hook.

Towing multiple rigs behind planer boards to maximize his trolling spread, Ormseth lets several lines drag along bottom. Simultaneously, he often pulls two outside lines with surface chum rigs—the same scent chamber device rigged ahead of a foam float/buzzbait blade and hook, which sputters the surface and brings big blue, flathead and channel catfish to the top. Explosions are awesome, and many trips produce more topwater catfish than his other four rigs combined. To date, he’s boated flatheads up to 50-pounds, blues over 70 and voluminous numbers of channel cats, all on his surface chum rigs.

Think trolling only works on major catfish factories? Think again. Decades ago, when Michigan walleye pro Mark Martin first caught heavyweight flathead catfish on crankbaits, it was a serious surprise. Decades and countless cats later, Martin no longer bats an eye. At times, he says, while nighttime trolling with #13 Original Rapala Minnows in lakes Muskegon, Manistee and White, as well as the Grand and Saginaw rivers, flatheads can be so aggressive that they literally drive walleye anglers off the water.

On average, Martin’s flatheads run 20 to 25 pounds, with plenty over 40. “You’ll catch numbers of flatheads all summer,” he says. “But we definitely get our biggest fish from late August through early October.”

Besides his Rapala Minnows, the key to catching cats, Martin reports, is to locate substantial log piles near breaklines. In waterways attached to the Great Lakes, these log piles are plentiful, thanks to lumber barons who operated during the late 1800s. Flatheads that live in the timber, he says, love to venture out to snap jaws over a well-placed crank.

Lest you think Martin’s Great Lakes flatheads are a fluke, consider that countless anglers casting crankbaits for bass regularly tangle with cats in reservoirs all across the U.S. While prefishing for a 2009 B.A.S.S. tournament on Wheeler Lake, Alabama, Elite Series pro Stephen Browning boated an enormous 51-inch flathead, casting a Rapala DT-10 along a 9 to 17-foot ledge at the end of a creek arm. In Nebraska reservoirs, biologist and master angler Daryl Bauer shorecasts with crankbaits, regularly landing flatheads up to and exceeding 50-pounds. His favorite lures? Number 10 Husky Jerks, #9 Shallow Shad Raps, Smithwick Rogues, and even Berkley Power Swim Shads rigged on ½-ounce jigheads, such as the VMC Flat Shad jig.

For our final quirky cat trick, we’ll come down to earth to tell you about a straightforward method for taking oodles of hard-hitting channels. Regardless of locale, cats flock to current. Could be a small river eddy area, windblown reservoir point, or just a bit of wave action blowing into a weedline on a pond. In each of these cases, nothing beats a good old bobber and bait. But not just any old bait. Champion catfish angler John Jamison recently discovered a new breed of bait called Leakin Livers. An alluring alternative to catfish’s favorite bait—chicken livers—Leakin Livers are non messy, odorless and always handy, stored snugly in your tackle box.

To fish the new bait, Jamison rigs with a 7 to 8-foot spinning rod and a tough-as-nails 14-pound test monofilament, such as Sufix Tritanium Plus. He then slides a slip float onto his line, followed by a #25 InvisaSwivel, and a 12-inch leader with a ½-ounce splitshot and 1/0 Rippin Lips Tournament Grade circle hook. Next, he confidently baits up with a chunk of Leakin Livers, which he calls “the cleanest, most user-friendly catfish bait on the globe.” Incidentally, Jamison says, the stuff stays on the hook incredibly well, and attracts boatloads of channel and small blue catfish everywhere he’s tried it.

“Make a long cast,” he instructs. “Don’t worry, because Leakin Livers always stays on the hook and won’t come flying off. Now, let the wind or current deliver the float and bait across a wide area. As the bait drifts along, it releases a strong trail of scent and flavor, which cats love. Follow its path with your rodtip, and when the bobber sinks, reel down until you feel weight, and then cross his eyeballs.” If catfish are anywhere in the vicinity, and you’re using this active approach, he says, “Your bobber’s going to go down a lot.”