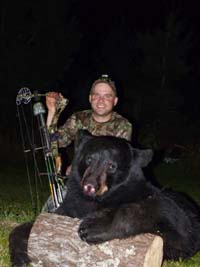 Baiting season has been on for a couple weeks now, but only one of mine has been getting hit. This is in the no-quota area of Minnesota, where you can shoot two bears every year. I’m used to drawing one tag every eight years in Wisconsin!!

He and one other bear have been coming in quite regulary, often times as early as 2pm. Go figure that two days before the season opens, my only hot bait goes stone cold………

This bait is nearly a half mile walk from the truck, which makes popcorn the logical choice (ever carry 5 gallons of cookie dough a half mile??? that dump is heavy!!)

I figured another baiter had come in with a more appetizing offering. The heat had also kicked it up over the last few days too. Temps have been in the mid eighties. This was my logic for the bait going cold.

I don’t know much, but I do know this, killing a bear is impossible sitting in an air conditioned house

Opening day had me in the stand by 1 pm. Walking into see the bait still un-hit doesn’t exactly give a guy high hopes……….. Seven hours later, the day ended with sightings of only the “elusive” red squirrel……. Pulling the camera card confirmed that the two bears I had coming in for weeks, were now officialy missing in action.

The forecast for Sunday was to again approach 90 degrees. To say the least, I wasn’t thrilled on my long sweaty mid-day walk in. My hopes were as low as the mud on my boots. If the bait was not hit over night, I was half thinking about scrapping the hunt.

As I neared the bait, a large grin crossed my face The logs were once again strewn about, but nearly all of the bait remained??? Fearing that I may have bumped the bear off the bait, I did my normal routine (being loud, stacking the logs etc). I quickly climbed the tree and awaited his return.

Finally, with just twenty minutes of time left to hunt, movement catches my eye. It’s black, and it’s headed right for the bait! The mosquitos were beginning there evening gorge, but seeing that bear made me all but forget about them.

My pulse quickened as he neared. He was in no hurry, but it seemed that he closed the ground in seconds.

Now within 10 yards, I was certain that he was worth taking.

After giving the bait a quick sniff, I was suprised when started to walk away!!!!! He had found something more interesting than the bait……………

Earlier that evening, I looked down at my bow hoist strap still reaching to the ground after bring my bow up. I said to myself, “Self, you should probably wrap that up………………….nah, it’ll be fine…….”

Well Mr. Bear thought it would be a good idea to see what this fancy little strap was connected to. It’s one of those manual wind up Sidewinder hoists, and it was connected to the bottom of my climber. After pulling the extra 10 feet or so of slack out of it, he REALLY started tugging on it!! I said a little prayer, asking for that strap to just break……..break………… …..it did not.

A few moments later, he decided the strap wasn’t worth the trouble………Thank God!

But, that blob 15′ looks kinda interesting!!

Then I had another one of those moments, when you realize earlier you should have brought something with, but didn’t.

With all of my guns secured safe and sound behind 6 stainless deadbolts, and a quarter inch of steel, miles away, I kinda had one of those moments again

As he began to climb, I told myself to keep quiet until he got to the platform. If that happened………………. well, I didn’t have a plan if that happened

Luckily he only came up a few feet, then dropped back down on all fours.

As he started to head away from my tree, I realized he may not be going back to the bait!!! He might be leaving!

He was eight yards from my tree, slightly quartering away, and walking slow.

I don’t even remember drawing back. Auto-pilot took over.

The next thing I see is a Lumenok dissapearing though the boiler room!!!!!!!!!!!!

He took off like a bat outta hell! Within 10 feet of the shot, I see blood pouring from his sides and face! Ten yards from the shot, and he’s losing it! At the twenty, down he goes!!!

I get pumped shooting a deer, but I get totally jacked up sticking a bear!!!

Sitting back down, I let the natural high overtake my body. Every inch of my body is now tingling. For five minutes I let the amazing feeling flow. For me, nothing else on earth replicates it.

There is something about taking an alpha predator with a bow that brings out the most primal emotions……………. too many people wasteing their lives away will never feel this. It truly is a gift from a power greater than us.

After a few minutes, I drift back to reality. Got a nice public land bear down, and need help getting it out of the woods. I text my buddies, one shows up in no time to help. We cart him out of the woods, pack with ice, and head to his place for some photos, butchering, and beer. A great day, finished with a great night!

Thanks to all of you guys that sat through and read this. I hope you had as much fun as I did writing it!

Before I sign out, I suppose you want some details. He went 240 dressed out, maybe somewhere close to 300 live. Got a big old Nug on him, no doubt a P&Y.

I would like to thank my sponsors, Muzzy, LoneWolf, and Bowtech!!!